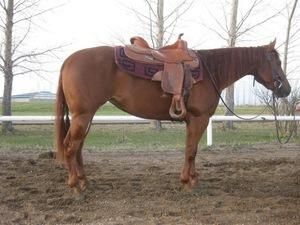 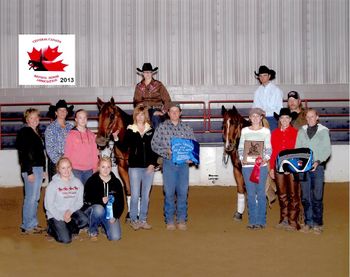 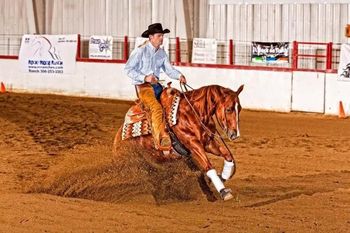 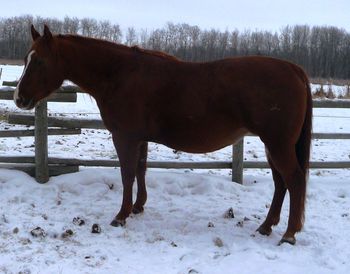 I was blessed to be able to obtain this mare to add to my program thanks to the generosity of Darroch Performance Horses.  Spookabella, AKA as Sienna is a conformationally correct, lovely mare with NRHA earnings, but due to a career ending injury she has joined the broodmare band here at D Hanson Ranch.

Spookabella is sired by Smart Spook who is a Top 10 leading sire of NRHA, with offspring earnings in excess of $4 Million and is an inductee into the NRHA Hall of Fame. By Smart Chic Olena, a sire of performance earners of over $11 Million, including nearly $7 Million in NRHA money alone and out of Sugarplum Spook, dam of earners of over $500,000, in reining, cutting and cow horse, Smart Spook has very strong genetics on both sides of his pedigree, as well as an exceptional temperament and very sound conformation. These attributes have allowed him to earn over $400,000 in the show pen himself, with a show career spanning nearly 10 years (excerpted from Sterling ranch web site).

Spookabella is out of the dam Rush N Cat who has produced 17 performers amassing over $110,000 in NRHA earnings, over $3000 in NCHA earnings and over $7000 at the AQHA World Championship show.

As both parents are 5 panel n/n, Spookabella will be as well.

Spookabella is a welcome addition and I look forward to what the future holds in store.

You are visitor number: 211

Back to Mares page